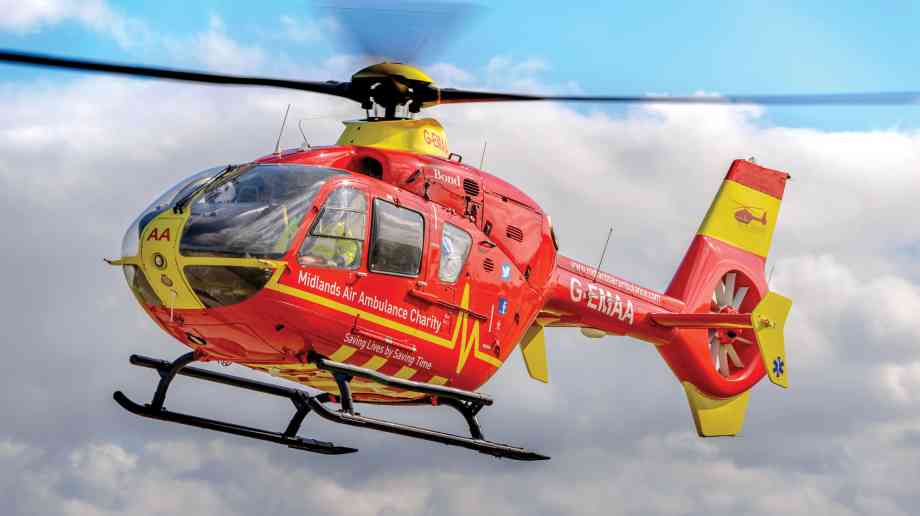 Clearing the air on pre-hospital care

Dr Nick Crombie, clinical lead for Midlands Air Ambulance Charity, discusses the latest technological developments in pre-hospital care and the impact these have had on patients.

A man was walking along the road and came upon an injured traveller who had been beaten and robbed. The man cleaned the traveller’s wounds, bandaged them, put him on his donkey and took him to an inn where the man and the inn-keeper cared for the traveller.

The story of the ‘Good Samaritan’ was told two thousand years ago, but remains as relevant today as it did then. The oil and wine used to clean the wounds are now antibiotics, the bandages are now impregnated with chemicals to promote blood clotting, the donkeys are now state of the art helicopters, and the inns are now Major Trauma Centres, but the principles underpinning pre-hospital care have not changed.

Enhanced Care Teams across the world deliver modern and innovative care to the most critically ill and injured patients by air and by land, and the phrase ‘bringing the hospital to the patient’ is often quoted. Within the last ten years the ability of these Enhanced Care Teams, such as Midlands Air Ambulance Charity, to stabilise and then transfer patients to specialist treatment centres has developed at an ever-increasing rate, with the support of a number of medical interventions and devices. There is no doubt that innovation in the pre-hospital arena has been rapid, embracing technologies tried and tested in hospital as they then become portable, battery powered and affordable.

New technology
There is one fundamental question that must be asked when considering new technology or devices for pre-hospital use: ‘does it improve outcomes for our patients?’ Even such a simple question is not easily answered.

Firstly, how are these outcomes reliably measured and tied to the innovation? When modern healthcare resembles an incredibly complex jigsaw of treatment and specialists that may span weeks or even months of care, how can we determine if changing one small piece of that jigsaw at the start of the treatment pathway has an enduring effect amongst so many other variables? It gets more complicated. There are many innovations that undoubtedly give us extra information about the state of our patient, and information is often useful. However, if the treatment does not change as a result of that information, then have precious minutes and money been wasted performing an investigation that ultimately does not alter the care of the patient?

Blood is a good example. In 2008 British military forces started carrying concentrated red blood cells on rescue missions in Afghanistan. In 2012, some UK civilian air ambulances (not Midlands Air Ambulance) followed on the basis that it seemed logical that we should give bleeding patients blood, and the military experience had been positive. There are, in my opinion however, already two flaws in this strategy. The British military were retrieving young, healthy soldiers with absolutely catastrophic injuries caused by high velocity rounds and improvised explosive devices in areas located long distances from field hospitals. This scenario is wholly unrepresentative of the UK civilian population. Secondly, the ‘blood’ we see being given is actually a small fraction of whole blood. It is a concentrated bag of oxygen carrying red blood cells in a preservative solution designed to stop the contents clotting. Without the other fractions of whole blood that contain a myriad of vital components including the clotting factors, giving this can often encourage further bleeding.

When the evidence from papers published all around the globe is collated and analysed, there is seemingly no suggestion that giving concentrated red blood cells in the pre‑hospital phase offers any long term benefit to patients. That evidence does not currently exist. And yet there are huge logistical operations in place involving hospital blood banks packaging scarce red blood cell bags into cold boxes, shipping them on motorcycles to some air ambulance bases from where they are carried to patients and transfused, not without risk. The fundamental question ‘does it improve outcomes?’ is not answered. This is the case for the majority of patients who are receiving it, and it is detrimental to the wider population when funds are diverted to the infrastructure to support it.

This illustrates one of the problems of rapid innovation. Novel treatment can rapidly become standard practice as the search for the next innovation continues without pause to reflect on efficacy or value.

Further developments
There are several other developments and medical devices that have started to make an impact on pre-hospital services in the recent years. Ultrasound scanners, traditionally used in hospitals to visualise internal structures have become portable, battery powered and produced at a cost that makes them accessible to pre-hospital teams. Using these devices with confidence requires considerable costly training and ongoing experience.

It is possible to visualise the heart using a portable ultrasound scanner which may guide resuscitation during cardiac arrest or severe cardiac failure, or used to identify free fluid within the abdomen which may indicate internal bleeding. It is however important to audit the use of ultrasound and how it may impact on decision making.

Some patients may receive higher levels of care, for example because free fluid is identified following a traumatic injury warranting transfer to a major trauma centre for further investigation and treatment. If a patient that has suffered a trauma has a normal ultrasound, would that patient receive a lower level of care? That situation would require extreme confidence in the ultrasound and the operator to reliably determine that despite the trauma there was no internal injury. Therefore, it is not enough to procure and use an ultrasound – it is vital to put in place procedures to monitor its use, the effect that it has on decision making, especially if the effect is to reduce the level of care a patient receives, and the outcomes of those patients.

One problem with this aspect of governance is that it has traditionally been difficult to reliably follow up patients treated in the pre-hospital environment. They may be taken to different hospitals, sometimes before identifying details are known. There are difficulties passing patient information between organisations for fear of breaching confidentiality legislation. Lastly, individual pre-hospital services may audit their individual practices in isolation for internal training purposes only.

However, this is changing with another technology – electronic patient reports (EPRs). The days of hand-written charts with carbon-copies that were left, often illegible, at hospitals are changing as EPRs are rolled out across ambulance and air ambulance services. These capture live data streamed from compatible patient monitors and as the reports are populated by clinical staff they are able to be viewed by the waiting hospital teams. This integrated technology allows for much faster and more complete feedback.

Improving patient outcomes
The fundamental question – ‘do these innovative medical devices and practices improve outcomes for our patients?’ remains very difficult to answer, but simply ignoring it in pursuit of newer and more cutting edge technology is not good medicine. This is why seven of the UK’s air ambulance services are participating in the first true trial to ascertain whether pre-hospital blood products do in fact improve patient outcomes. This trial, led by Midlands Air Ambulance Charity, will allow researchers to study the effects of transfusion at the scene of injury, through the emergency department, operating theatres and critical care and on to discharge from hospital.

This scale of collaboration between seven air ambulances, nine major trauma centres, four NHS ambulance services and the supporting university trials unit is a considerable undertaking, but will go a long way to providing an answer that services across the globe have been searching for. It is also important that air ambulance services can tell the public with confidence that any new technology and medical devices will have a positive impact on the care of the patients they treat, and trials of this nature will provide that reassurance.

Pre-hospital medicine has been practiced since the Good Samaritan came across the injured traveller, but the rapid evolution of technology and devices in this environment can be measured within the last 20 years. There is enormous interest in improving the care of patients within the first hour of injury through technology and innovation and air ambulances are well placed to lead on this. As long as every step forward is measured and reviewed, pre-hospital care will deliver the best of cutting-edge technology to the patients that need it most.