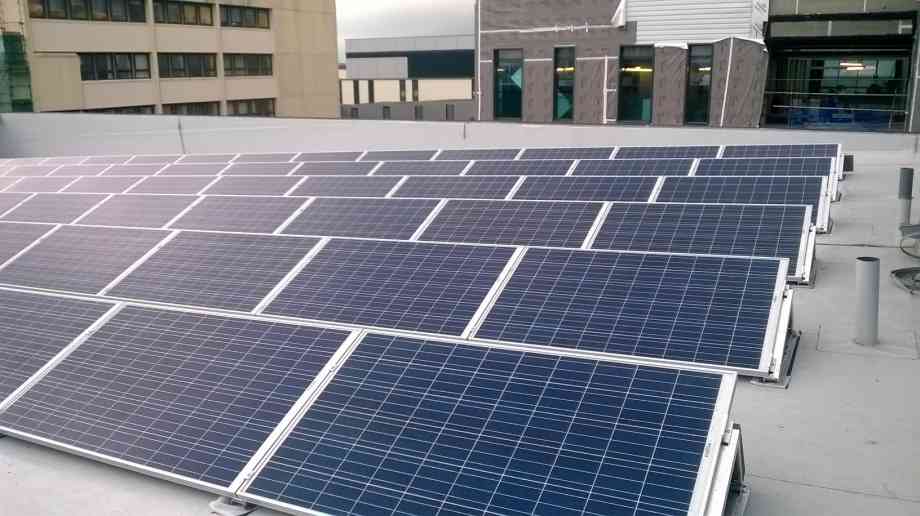 Hospitals are blessed with large buildings, which means large roof spaces. Oliver Savory, Communications and public affairs officer at the Solar Trade Association, suggests that it is time that hospitals started to manipulate this space to save energy. Here, he details how and why

The MRI scanners, dialysis machines, x-ray machines and heart rate monitors all need electricity and, more often than not, need to run 24/7. The lights are on round the clock. Air conditioning units and refrigeration requirements are also very high. Hospitals need a lot of electricity.

With budgets tight, and getting increasingly tighter, all that electricity can represent a significant cost. With volatile energy markets, and expected price rises over the coming years, controlling, and bringing down, those costs allows for greater flexibility in other areas. What hospitals often do have, however, is lots of roof space, and that space needs to be considered an asset, rather than just empty space.

Save on your energy bills
Solar PV keeps getting cheaper. It fell by 70 per cent between 2010-14 and has continued to fall from there, with recent government predictions expecting it to get even cheaper still. This has meant that even as government support has tailed off, solar PV systems can still offer great value for money.

The main benefit for going solar is that it is a cheaper way of getting electricity when compared to buying in power from the grid from your usual supplier. If you assume that you are purchasing power at around £100 MWh, after grid charges and policy costs, a solar system with a Power Purchase Agreement might be able to supply you with electricity at £70-80 MWh.

Government schemes, such as the Feed-in Tariff which pay you a set amount per unit of energy created, still exist; however caps on deployment can make them harder to qualify for, and the low rates mean they make up less of the business case for solar. For a hospital this shouldn’t matter, as they are far more likely to achieve the holy-grail of commercial solar installations – 100 per cent self-consumption.

Whereas other commercial buildings may only use 50-70 per cent of the power their system generates, as they are closed on weekends and holidays, hospitals have high power demands seven days a week. This can make the business case stack up even with zero government support.

How to finance your solar system
There are various business models that can be used to pay for a solar installation. The simplest is to pay for the installation outright and earn your investment back thanks to energy bill savings, and generation tariffs if you qualified. Secondly, if the institution doesn’t have funds available to pay for the system outright you can look at borrowing the money.

But the most popular option is financed or funded solar. This is where an external investment company pays for the installation and sells the power to the hospital. The hospital pays nothing upfront and buys the electricity generated by the system from the investment company more cheaply than grid electricity through a Power Purchase Agreement (PPA). Maintenance is usually covered for the duration of the term.

Here are some key questions to ask before entering into a PPA: what is the PPA rate? What is the price per kWh of electricity offered? How does that compare with what you pay at the moment? How does it inflate each year? Is there a guarantee to ensure that the PPA will not be higher than the prevailing market price for electricity? Does the hospital have to buy all the electricity generated even if not used on site? (This is less likely for a hospital, but some PPAs will require the building to buy 100 per cent of the electricity even when it doesn’t use it all.)

Car parks or a mini solar farm?
Roofs may not be the only place to put solar on a hospital’s estate – although for urban hospitals it’s probably your best bet. Solar canopies can be considered for the car park; they can supply both the hospital itself as well as any electric vehicle charging points and as a bonus provide shelter for patients getting in and out of cars.

An option for rural hospitals that perhaps own a considerable amount of land around the estate is a ‘mini solar farm’ or ground mount solar array. This can then be used to supply the building with what is called a ‘private wire’ connection. If considering a ground mounted system it is important to think about the area around it, many solar farms are doubling up as areas of high biodiversity through the sowing of wildflowers around the panels.

Solar thermal
To date the biggest solar market has been for solar panels that generate electricity – called photovoltaic solar or PV. However there is also the alternative option of solar thermal hot water heating. Hospitals have considerable hot water requirements for showers and catering.

Solar thermal hot water installations are typically cheaper than solar PV panels, and subsidised by the Renewable Heat Incentive (RHI) which means that the technology has similar rates of return on investment and similar payback periods as solar PV. Contrary to misconceptions, solar thermal relies on light, not heat, to heat the water, so can continue to work even with outside temperatures below freezing.

It is worth nothing that the RHI is currently under review, with the results due out by the end of the year. One of the proposals is to take solar thermal out of the RHI. The exact details of all government support for solar systems are changing quickly, so always check what you are eligible for.

How to do a solar install
If you decide to go ahead with a solar install, it is usually worth engaging the services of an experienced independent consultant who can draft a technical specification document. The consultant can also liaise with the installer as well as inspect the finished system prior to handover – this should give you some additional peace of mind.

What to ask your installer:
• Ask to see sample risk assessments and method statements from previous similar projects
• Ask to see design statements covering things like lightning protection and how fire risks will be minimised and managed
• Obtain confirmation that the roof will be assessed and signed off by a qualified structural engineer
• Ask to see samples of all structural and structural design assessments undertaken for similar projects and confirmation they will actually be provided for the project in question
• Require detailed justification (including energy modelling) of the system as designed including component selection (panels and inverters)
• If the operatives working on-site will be directly employed or subcontracted, and if they will be DBS checked
• Confirmation that the contractor will obtain permission to connect to the grid under G59, and ensure that this will be provided before works commence
• Confirmation of what kind of system monitoring will be provided to ensure no faults – and consider also using a public display in e.g. a waiting area so that your staff and patients are aware that the building is solar powered
• Check whether the installer is a member of the Microgeneration Certification Scheme (MCS) and the Renewable Energy Consumer Code (RECC)

Conclusion
Solar has a lot to offer hospitals – a green and cost effective way of generating at least some of the power they require. There are substantial savings to be made, and with energy prices looking increasingly volatile the ability to control costs is becoming increasingly attractive to all kinds of organisation. The policy framework for solar is changing, so make sure you stay up to date with the latest subsidy offering, but installing solar on the roof of a hospital could well still be a very canny investment for your site.