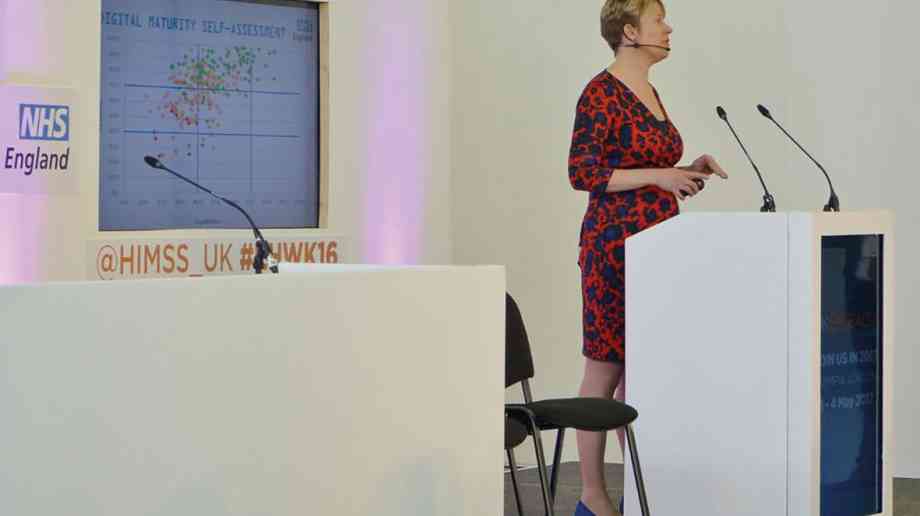 Unleashing the power of e-health

UK e-Health Week proved to be a great success again this year, as nearly 3,000 health and care professionals, along with approximately 60 IT suppliers, turned up in force on the 19-20 April to see and hear the very latest about e-Health. Health Business casts its eye back over the show.

As this is one of only two digital health events supported by NHS England, numerous health leaders from the organisation attended, including chairman, Sir Malcolm Grant, director of digital technology, Beverley Bryant and chief scientific officer, Sue Hill. All three senior leaders from the NHS offered insightful talks across the two day event with Bryant focusing on interoperability being the key to a paperless NHS, Hill giving an update on the Genomes Project she is leading and Grant delivering the closing keynote at the event, speaking about how genomics and data are a big part of the future of health in this country.

NHS Digital replaces HSCIC
Arguably the biggest news of the week was announced by Minister for Life Sciences, George Freeman, as he informed attendees that the HSCIC had changed its name to NHS Digital and a new appointment in Noel Gordon would be the new chairman as of the 1 June, taking over from current incumbent, Kingsley Manning. The news sparked a huge buzz around Olympia, with many agreeing that this change would certainly benefit the NHS moving forward into a paper free era by 2020.

Aside from the NHS Digital update, Freeman also gave the opening keynote on the second day, talking about how the digitalisation of the NHS is hugely important for the future of health in this country. He was also part of the National Information Board (NIB) Leadership Summit, addressing why it is imperative that the NHS becomes digital within the next four years. Furthermore, chief executives from across the health and care system received the portfolio and governance plans for Personalised Health and Care 2020 following the outcome of the Spending Review. The NIB also agreed proposals for the future work programme and sign off of the NIB annual report.

Local Digital Roadmaps
Another major topic of much discussion was the use of Local Digital Roadmaps (LDRs) and how vital their role will be moving forward.
The talk was led by Paul Rice, head of technology strategy for NHS England, along with four other guest speakers.

Luke Readman, chief information officer for Waltham Forest, Newham and Tower Hamlets CCGs, argued that LDRs will be an extremely important tool to use as we edge closer towards a digital era.

He said: “LDRs are an extra tool explaining what our priorities should be and if it is governed properly it will become an established part of the top tiers of our discussions. If we all pull together and make LDRs work this could get discussions about a paperless NHS to the top table. It will be used as a lever to help change and a lever to try and access funding to support that change.”

Tim Ellis, a programme manager digital for NHS England, explained how Sustainability and Transformations Plans (STPs) can align with LDRs, while also clarifying that they are still currently in the process of helping people understand what a digital footprint means.

Adebowale pleaded with the audience by saying ‘don’t fail your kids’ – meaning that if e-Health isn’t used in the correct manner then it would be useless to use.

He added: “There is a future, in expectation of young people, they have expectations of health care which I am really grateful for. They expect it to be prevented; they expect to be citizens, not patients. They expect relationships from not getting ill. They expect technology to be designed with them, not for them.

There will be challenges. We need to use tech and we need to co-produce the means of enhancing relationships and communication. We need to engage the citizens in health and social care. How do we build in the use of technology for the young? These all need to be addressed urgently.”

Pulling together is the priority
Andy Kinnear, head of BCS Health Group, echoed Adebowale’s sentiments about everyone pulling together to achieve a seamless transition towards paper free.

He explained: “Trying to deliver the agenda will be a huge challenge. People will be working on different areas as we move into a digital era and it is all about getting the machine working together, working with network groups, working with CIOs, working with professional bodies and ensuring that we all pull together.”

Arvind Madan, director of primary care for NHS England, also commented on how pulling together is a necessity and for GPs it is absolutely critical.

Madan said: “When I started my role in December, my ambition was to try and bring some insight into what the frontline of general practice looks like and feels like within the NHS England team. We want to try and create a stronger connection with the profession. To develop a vision, develop a size and scale in teams with and across practices and the direction we want general practice to take.”

Dame Fiona Caldicott gave a talk on her latest review, commissioned by the Secretary of State for Health, regarding the controversial Care.data system. However, she announced at UK e-Health Week that this won’t be released until 23 June at the earliest due to EU referendum ‘purdah’.

She said: “The review may be put down the pile by the government, in which case it may be after 23rd June when we can get feedback on it, as once published it will go out to public consultation. This will be useful as we can then gauge how the public feel.”

Vanguards, leadership summits and plenaries
While the Five Year Forward View and Personalised Health and Care 2020 frameworks were hot topics during the week, a number of other pertinent issues were addressed including vanguard sites, RightCare and population health. Vanguards were discussed at length on day one, with pioneers speaking about their involvement at a vanguard site and how e-Health is creating exciting developments, in addition to providing a strategic overview of the programme.

New models of care occupied significant interest, with a major focus being placed on how these are being used. Andy Evans of Sherwood Forest Hospitals, offered examples of how these have been trialled. A panel discussion followed this, with business challenges, clinical engagement, business transformation and technology solutions being discussed at length, with a particular focus on how these need to be introduced.

Three other plenaries took place including a Nursing Plenary which was chaired by Hilary Garrett, Director of Nursing, NHS England.
These lively panel sessions focused on how e-Health can empower nursing and midwifery, and included panel sessions discussing how technology and informatics can be used to enhance experience, outcomes and care.

International EMRAM award
An award was presented as part of the second day’s opening keynote given by Stephen Lieber, CEO of HIMSS, to Cambridge University Hospitals Trust (CUH) for reaching Stage 6 of their international electronic medical record adoption model (EMRAM).
CUH is the first trust to receive EMRAM Stage 6 for the effective use of technology in providing high quality patient care within a year of its new electronic patient record (EPR) going live. Hospitals that reach Stage 6 have established clear goals to improve safety, minimise errors and recognise the importance of healthcare IT.

Afzal Chaudry, chief medical information officer at CUH, explained how the award came about: “We started this in 2010 and we spoke to Dame Mary Archer about what it would take to introduce an electronic patient record. We had a series of old systems that were rapidly running out of support. Although our quality of care was extremely good, we knew that there were many more things we wanted to do. An initial period of four months was spent with stakeholders and we decided that an integrated system was best for us.

“Now, colleagues come up to me saying they understand how the system works rather than asking for my help. However, this is by no means the end of it. Some of the things we configured for the go live have been replaced already. What is clear is our hospital won’t be the same again.”

The importance of e-Health Week
With the 2016 UK e-Health Week now at a close, health leaders explained how important an event like this is as they move forward into a digital era.

Beverley Bryant commented: “This event brings together professionals, CIOs and suppliers so they can work together to help make this reality and it is also about sharing best practice. Everything that we want to do has been done somewhere, but we might not know about it so everyone who comes together at this HIMSS UK event can speak to each other, learn lessons and it will be beneficial for everybody.”
Health Insights preview

In June, HIMSS UK will launch their 2016 Spring/Summer series of Health Insights events, beginning in Birmingham on 15 June, then off to Manchester on the 22, Leeds on the 29 and London on the 6 July. These are free one day regional events targeting healthcare professionals. Over the series, you will hear from the people who are setting the direction and meeting challenges, such as achieving the 2020 target for a paper free NHS. The events aim to diffuse innovation across the country and provide you with the tools and knowledge to apply the second you get back to work.

The three key elements of each event will comprise of talks regarding Sustainability and Transformation Plans, Interoperability and Local Digital Roadmaps. These three tools are vital for health professionals to know more about as we move into a new digital era. L