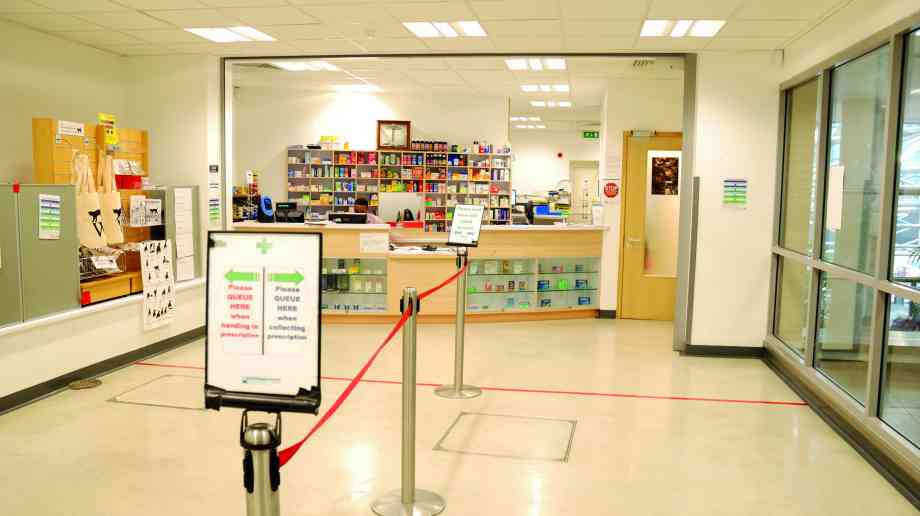 Embracing a design-led approach can really improve outcomes for staff and patients in hospitals across the country. The Design Council reports on the work undertaken at the Whittington Hospital pharmacy to improve the patient experience

‘Being patient is difficult when you are the patient’ says chief pharmacist, Dr Helen Taylor, who opened the doors to the new pharmacy at The Whittington Hospital, north London last July. Taylor shares the success of embracing a design led approach to improve patient outcomes in a busy London hospital.

Until recently, collecting a prescription was not a pleasant experience for many patients entering the pharmacy department at the Whittington. Patients entered a space dubbed by many staff and patients as the ‘bus shelter’. It was cold, confined and lacking in any warmth. Most people coming to the pharmacy were unwell and anxious, and for most, the pharmacy represented the last leg of an already long journey through the hospital system.

Efforts had been made over the years to try and improve the situation. The hospital regularly asked patients to share their views on how to improve the pharmacy but little feedback was received and very little changed.

In 2016, the department received a scathing letter from a patient who described her experience visiting the pharmacy. Taylor said: “I received a letter from a patient and it was very truthful. I used this as an opportunity to engage this patient and ask her to help me and the team improve the waiting experience. I also wanted to improve the working environment for pharmacy staff. It was difficult and confined.”

Taylor felt sure the answer lay with design, so she turned to Design Council's public services transformation programme to bring about change. Design Associates Anna White and Sean Miller were parachuted into the pharmacy to work alongside Taylor and her team to analyse the service and pinpoint areas where improvements could be made.

She adds: “We engaged the Design Council who enabled us to engage with designers, architects and our patients, to explore how best to use the space and speed up the process inside the pharmacy” she said. “The collaborative design process made us stand in the shoes of patients and think about what it was like to be a patient in our pharmacy and this was really insightful.”

A co-design approach
Working together the team identified three aims for their change programme: improving the experience for patients, using every intervention as a health promotion opportunity and developing a retail offer to offset expenditure.

The team engaged a specialist design agency to assist and they adopted a co-design approach, which focused on enabling pharmacy users to collaboratively create a space that would work best for them. This began by establishing a programme of workshops with representatives from patient, staff and management groups.

Taylor comments: “As pharmacists, we know what is important but the designers brought the principles of design, and taught us to think about it as a design process. They made us think in a different way. We would probably have done something quite conventional if the designers had not been engaged, but by applying the co-design process we were able to gather feedback from patients in real time. We also engaged with people we have traditionally struggled to engage in the past, so we could get feedback from a more diverse group of people, including those who do not traditionally respond to these surveys. This allowed us to obtain a broad range of new insights that I am convinced we would never would have been able to get if we applied the same methods we have used before.”

The unhappy patient who contacted Taylor with her concerns was invited to the project: “I asked the lady who complained to became actively involved. She did, and she presented to the trust board and secured buy-in from senior management. She has since become an advocate for the project which is fantastic.”

The patient experience
One of the key insights identified early in the process was a lack of clear communication between the pharmacy and the patient. Many patients wondered how long they would have to wait and this was frustrating to patients and caused further anxiety. Working together, the change team made up of staff, patients and design experts came up with new ideas for how the space could work. Ideas were tested and retested, first in model form, then at half scale, and finally at full scale. Patients provided real-time feedback as they interacted with the new prototype elements in the pharmacy.

The full-scale prototype developed from a model and an idea into a new look live pharmacy in July last year. Taylor and the team have been overwhelmed with compliments and positive feedback from staff and patients since they re-opened.

Taylor says: “The feedback from patients has been extremely positive. Our pharmacy has transformed from a cold and unwelcoming place to a professional modern pharmacy service that patients like to visit. It is open, patients can see staff, communication is clear and information is presented more visually and therefore more clearly . It is bright, clean and you can get coffee and purchase items while you wait.

“The pharmacy is a calm place now. Patients can see staff working. Previously they were hidden away. The relationship between staff and patient is much improved.”

Following the success of the Whittington Pharmacy re-design, importantly for the hospital, it has also produced a design model that can be applied to other spaces within its walls, and a willingness to experiment. The hospital was so pleased with the success of this project it applied the same co-design process to help create their major new ambulatory care centre at the hospital. Since the design, build and launch of the centre, the ambulatory care given to patients in this environment has been rated as outstanding by the CQC. The Whittington has also been commended on how they manage medicines in their pharmacy and their overall outpatients rating has improved since the service re-design.

Taylor said: “As we get funding for different projects, we implement the design approach. The hospital’s management team feels strongly that we should just push work like this through because it has such a good effect on patients.”

Meanwhile, in other NHS hospitals, design thinking is being adopted to improve the waiting experience in A&E. Design Council’s ‘A Better A&E programme’ uses a design approach to reduce hostility and aggression in A&E departments in order to prevent lost productivity and reduce security costs which is believed to cost the NHS millions of pounds every year.

The design team sought to create solutions that would improve the patient experience. For patients, this meant being better informed at every stage of their journey through A&E and remaining in control of decisions. For staff, the focus was on creating safe secure environments to work in.

Embracing a design-led approach can really improve outcomes for staff and patients in hospitals across the country.

£7.5 million will be invested to support digital shift scheduling across 38 NHS trusts, allowing staff to spend more time with patients.

EE is extending its offer of unlimited data for NHS workers until June 2021, as pressures increase in the third national lockdown.