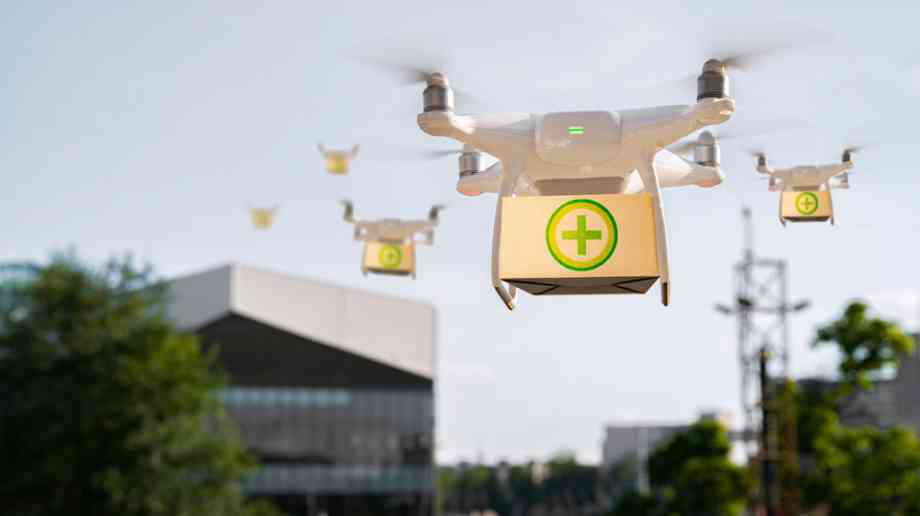 Drone technology is taking off in the NHS

Following a number of trials, Health Business looks into the impact drones could have on the future of the NHS

A recent trial on the Isle of Wight tested the capability of drones to deliver chemotherapy to cancer patients. As part of the trial, chemotherapy treatments are flown from the pharmacy at Portsmouth Hospitals University NHS Trust to St Mary’s Hospital on the Isle of Wight where staff collect them before distributing to hospital teams and patients. It is believed the trust are the first in the world to deliver chemotherapy drugs by drone.

The usual delivery time between the two sites is four hours, but the drones are able to do it in 30 minutes – saving time and money and preventing cancer patients from having to travel to the mainland for treatment.

The use of drones also removes the need for cars and hovercrafts or ferries to make deliveries, saving carbon emissions and helping the NHS achieve its net zero goals.

At the launch of the Isle of Wight trial, which took place on the NHS’s 74th birthday in July, NHS chief executive Amanda Pritchard said: “Delivering chemo by drone is another extraordinary development for cancer patients and shows how the NHS will stop at nothing to ensure people get the treatment they need as promptly as possible - while also cutting costs and carbon emissions.”

Isle of Wight NHS Trust CEO Darren Cattell said: “We are still at a relatively early stage but the use of drones to transport medical supplies is a concept that has radical and positive implications for both the NHS and for patients across the UK as well as the Isle of Wight.”

This trial shows signs of success, with reduced delivery times for supplies, reduced emissions and local care for patients.

Speedy delivery
In a separate trial, hospitals in Lancashire and Cumbria are using drones to transport medical samples. The first phase of the trial involves drones carrying samples between the Royal Lancaster Infirmary and Westmorland General and Furness General Hospitals in Cumbria, all in their own dedicated airspace 250ft above ground level.

Currently, in Lancashire, samples are carried between hospitals several times a day, by van, taxi or motorbike. Again, using the drones will cut delivery times and therefore speed up the time it takes to get pathology results. And again, the electrically charged drones will reduce carbon emissions and help the NHS achieve net zero.

Phil Woodford from University Hospitals of Morecambe Bay NHS Foundation Trust (UHMBT) said: “This is electrically charged and runs on batteries by utilising solar and wind back at the landing pads we can get this to net zero and any surplus by solar or wind we can put back to the grid.”

He added that it was unnecessary to add to pollution and have someone sitting in traffic “when we have a machine that can do it for us safely”.

The sky’s the limit
Funding has also recently been announced for a national drone network to deliver medical supplies across Scotland. A consortium which includes AGS Airports NHS Scotland, the University of Strathclyde and National Air Traffic Services (NATS) is the recipient of the funding. The funding comes from the Future Flight Challenge at UK Research and Innovation (UKRI), from whom the consortium already received £1.5 million of funding in 2020, which was used to design drone landing sites.

The many remote communities in Scotland have difficulties receiving medical supplies through conventional methods, especially when these are needed quickly.

Gary Cutts, Future Flight Challenge Director at UK Research and Innovation, said: “With the potential to quickly deliver medicines, bloods and other medical supplies on demand, the CAELUS project laid the groundwork for revolutionizing health care access across Scotland.”

This funding should help remote communities across Scotland receive better and faster access to the healthcare they need.

With the trials listed above, it is easy to see the benefits drones can have in the NHS. The increased delivery times shown in all three trials will only be a good thing, with patients benefitting from faster treatment and faster test results – especially those in remote or isolated communities in Scotland and the Isle of Wight. The ability for Isle of Wight patients to be treated closer to home will also provide them with a better patient experience.

The ability of drones to deliver medical samples means patients can provide the sample at home and have it picked up by drone. Meaning they don’t have to travel to hospital or the doctors if they a unwell or unable, or risk making other people sick.

Decreased carbon emissions is a big goal of the NHS in their ambition to reach net zero - if drones are helping to achieve this, this is a big benefit.

Though not listed as a benefit of the above-mentioned trials, automated drone delivery will free up staff capacity as drivers won’t be sat in traffic and NHS trusts won’t have to pay for a four-hour taxi journey.

Another key benefit highlighted by the pandemic is the possibility of contact-free medication deliveries, to sites such as care homes, with vulnerable residents.

Drones can also be used to deliver urgent medical supplies to remote locations, or avoiding traffic in an emergency, meaning urgent supplies can be delivered quickly without having to traverse remote roads or sit in city traffic, or even get to areas that are not accessible by road, such as up mountains or at sea. Drones, unlike helicopters are also able to drop their load whilst still airborne.

Drones can deliver medical equipment before medical staff reach the scene. Trials in Sweden reported by The European Heart Journal have tested the delivery of automatic external defibrillators (AEDs) by drone. In 63% of cases, the AEDs arrived by drone before an ambulance reached the scene. One AED delivery saved a 71-year-old man’s life, arriving three minutes after the alarm was first raised by a passer-by.

Furthermore, it is much more cost efficient to fly a drone than a helicopter.

Another potential challenge is legislation. Aviation rules are still behind the technology when it comes to drones, which means the NHS are limited to what they can do.

Following on from this, the safety aspect needs to be considered. Though the drones involved in the Lancashire and Cumbria trial have their own dedicated air space, this will not be the case everywhere. Cooperation will be needed with other authorities, to ensure that drones do not interfere with other aircraft or technology.

Overall, the increase in drone use across the NHS is promising, helping to deliver patient care more quickly and more cost-effectively, whilst at the same time, reducing carbon emissions. If the technology develops and legislation keeps up, drone use will be an integral part of the NHS of the future.